RSS Feed
← Junebug Goes Topless, Day 2
Some Days are Better than Others →

I had a rather crappy week at work.  I was happy that yesterday was my Friday off (we get every other Friday off, a nice benefit, especially after a bad week).   I’m glad I could work on Junebug to take my mind off of things.  Unfortunately, the more I do to Junebug, the more I realize I still have left to do so it didn’t really cheer me up as much as I had hoped.

The more layers I take away, the more imperfections and years of damage I reveal.  This is how I feel when I take off my makeup.   I know that with age comes wisdom and character, blah blah but I’d rather those things be on the inside while I continue to look 25 on the outside!   I was watching the Today Show yesterday, and they were running a segment on how 50 is the new 30.  Well, in Junebug’s case, I don’t think that’s very true. haha   Junebug and I are not the same age, she is 53 and I am 35.  I guess what I’m doing is flipping her number so she’ll look more like 35, or at least I hope so.  Maybe once I’m finished, Junebug will prove that 50 is the new 30!    I may look more like 53 when I’m done with her though!

Yesterday, I continued removing various pieces from Junebug.  First, I removed the benches.  One side of the floor was pretty bowed, and the bench had cracked and was no longer attached to the floor.  I’m not sure why, it doesn’t seem like the floor is rotted.  I think it could be that the floor got warped when the wrong sized leaf spring was on that side, causing the trailer to lean.  The benches were just in pretty poor shape in general and needed a facelift, so it made more sense to remove them and repair before reinstalling.   It was actually really easy to take them out.

This is the spot where the floor is bowed.  You can see that the tile cracked, so I have to be careful since it contains asbestos.

Just so you can see how uneven it is, I put a level on the floor.  The trailer is level, just not this one spot.

Here’s a picture of the underside of the trailer before I had the leaf springs replaced.  You can see that the metal crossbar on the frame is bent upward, causing the floor to crack in that spot.  I am not sure if it’s where the previous owner hit something, or if the bent spot was a result of the wrong leaf spring.  I think maybe it was hit with something or perhaps bent when the original leaf spring broke?  Not sure…  I’m going to consult with the experts on http://vintagetrailertalk.freeforums.net/  to see what their opinions are before moving forward. 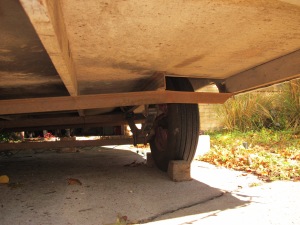 After I removed the benches, I removed the shelves in the closet that the previous owner had installed.  He obviously wasn’t a perfectionist like me because they were not installed to my standards.

You can see that the wood is a little lighter where they were.  I also removed the door to the closet since it will need to be refinished at some point.

I then removed the shelves above the dinette area.  One of them was a pain to get out, thanks to the twisty nails holding it to the closet.  I didn’t know what twisty nails were until yesterday, and they are not my friends, at least not when I’m trying to get them out.  The second picture below is where I messed up the wood on the closet thanks to those twisty nails.  I hope I can cover it up.

That white spot is where the shelf used to be.  I’m going to replace all of that paneling so at least I won’t have to worry about stripping the paint and shellacking the old wood. 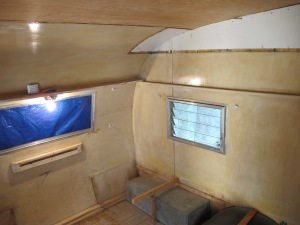 I still need to remove the sink and oven, and maybe the cabinets.  I haven’t decided if I can get away with leaving the cabinets in and still replacing the wood paneling behind them.  I may try that and see what happens.

I then moved on to the outside and removed the rest of the aluminum skin from the rear (that sounds gross but oh well).  There was a lot of wood rot and some damage on one corner, which is what I expected to see.  At some point, someone had run into something and the curb side corner was crunched in.  Luckily the window along the back wall did not appear to have ever leaked.  Those windows tend to leak, so I thought that was a good sign.  The damage was the worst along the edges and bottom of the camper, so I’m hoping it won’t be too difficult to repair.

Here’s a video clip so you can see a bit more of what the pictures above show.

This clip shows the rear of the camper.

A few more pictures of the rear, gross and gross. 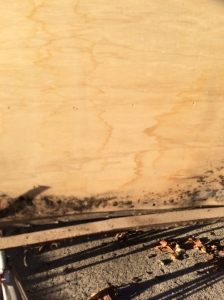 This is a testament to the poor craftsmanship of the people who made Shastas back then.  They appear to have poked a hole in the wall from the inside, and then filled it with some sort of wood filler and left it this way.  It was either that or the previous owner did this, I’m not sure. 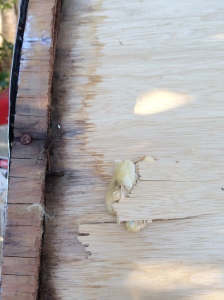 Today is Saturday, and it’s supposed to be beautiful outside.   I think I may pull out the sink today if I can get it out (hopefully it won’t be too difficult).  I may also attempt to start shellacking one of my birch panels to see how that will go.  I also really need to organize my garage a bit because it’s getting completely full of various pieces of Junebug, tools, and other random items.  I can’t even get to my washer and dryer!