I was at work all week, so that’s why you haven’t heard from me in a while.  The week was actually pretty eventful.  I got a lot done at work, made it to the gym a few times, managed to lose six pounds (healthy diet and exercise really does work wonders!), and I had two dates!  🙂  The dates were with the same guy, a musician I met on this dating app called Tinder (http://www.tinder.com/).  I figured I might as well try it since my friend met her boyfriend on there.  I normally hate internet dating, but you never know, and as busy as I have been, I hardly ever meet anyone the traditional way.  Working on Junebug is fun, but I guess it does make me a little antisocial. haha The first date was great, but the second one last night was kind of a let down.  I won’t go into the details, but let’s just say I will add that to my growing list of internet dating failures.  Oh well, at least I had this weekend’s project to look forward to instead of dwelling on my failure to find Mr. Right. 🙂

So, now back to my progress today with Junebug.  Today, I had intentions of removing the entire roof from Junebug.  Unfortunately, things took a little longer than expected, so I was only able to remove one more piece of skin.  I didn’t anticipate that it would take me over an hour to remove the stupid vent on the roof thanks to 50 years and several layers of sealant applied around it and over the screws.  Have you ever tried to remove a Phillips head screw with sealant in all the cracks?  Doesn’t work very well!

In the video below, I show you a few clips of my long and arduous journey to remove the sealant around the vent and ultimately remove the vent.

And in this video clip, the next piece of skin is removed and a lovely surprise is revealed!

And last but not least, I wanted to share a few more photos of the interior.  I removed the seat cushions and the carpet to reveal the original floor tiles!  I have heard that they may contain asbestos, so I’m trying to decide what to do with them.  I would love to remove the glue and add a wax finish so that I can keep them in Junebug.  I think they are pretty cool.  I’m going to do some research to see if that’s risky.  I already tried removing the carpet glue, and it wasn’t easy.  I may decide to give up on keeping them, we’ll see.  I’ll keep everyone posted on what I decide of course. 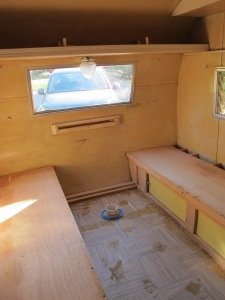 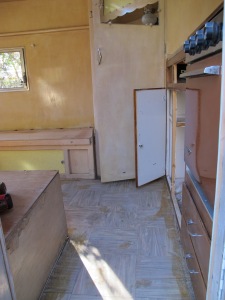 I also removed the wings the other day since they were sharp on the corners, and I was afraid they were going to poke a hole in my new cover.  I figured I would need to remove them anyway once I got to that point.  You can see where they belong, and Junebug can’t fly without her wings, so I can’t wait until I can put them back on!  I read somewhere that I could cover them with a pool noodle to protect my cover, so I will try that once I have everything put back together.

I’m thinking that at the rate I’m going, I may finish this project in time for my retirement! haha

P.S.   In case you didn’t watch the video and want to skip to the surprise.  Somebody at the Shasta factory was having a bad day…